An overview of processes and structures

Why silicon?
Silicon can easily be oxidized to form a high-quality electronical insulator, and this oxide layer also provides an excellent barrier layer for the selective diffusion steps needed in integrated-circuit fabrication.
Ancillary advantages: abundant element in nature, providing the possibility of a low-cost starting material; a wider bandgap than germanium and can therefore operate at higher temperatures than germanium.

The n-channel MOS transistor is formed in a p-type substrate. Source/drain regions are formed by selectively converting shallow regions at the surface to n-type material. Thin and thick silicon-dioxide regions on the surface form the gate insulator of the transistor(Gate Oxide) and serve to isolate one device from another(Field Oxide). A thin film of polysilicon is used to form the gate of the transistor, and a metal such as aluminum is used to make contact to the source and drain. Interconnects between devices can be made using the diffusions and the layer of polysilicon and metal.

Wafer Cleaning:
The wafers range in thickness from 250 to 500um.
Prior to use, wafers are chemically cleaned to remove particulate matter on the surface, as well as any trace of organic, ionic, and metallic impurities.

Barrier Layer Formation:
Most common material that serve as a barrier layer: Silicon dioxide(SiO2), Silicon nitride(Si3N4), polysilicon, photoresist, metals.
The original silicon wafer has a metallic gray appearance. Once an SiO2 layer is formed on the silicon wafer, the surface will have a color that depends on the SiO2 thickness (colorful).

Photoresist Application:
The surface must be clean and dry to ensure good photoresist adhesion.
In order to promote adhesion, the wafer surface is treated with an adhesion promoter such as hexamethyldisilazane(HMDS) prior to photoresist application.
The actual thickness of the resist depends on its viscosity and is inversely proportional to the square root of the spinning speed.

Mask Alignment:
Mask is a square glass plate with a patterned emulsion or metal film on one side.

Hard baking:
Following exposure and development, a baking step is used to harden the photoresist and improve adhersion to the substrate.

Chemical etching in liquid or gaseous form is used to remove any barrier material not protected by hardened photoresist. A high degree of selectivity is required so that the etchant will remove the unprotected barrier layer much more rapidly than it attacks the photoresist layer.

Wet Chemical Etching:
Buffered Oxide Etch (BOE) is a solution containing hydrofluoric acid (HF). HF etches silicon dioxide much more rapidly than it etches photoresist or silicon. Etch rate depends on the desity of the silicon dioxide film, temperature, the type of oxide present.
A high concentration of phosphorus in the oxide enhances the etch rate, whereas a high concentration of boron reduces etch rate.
Wet chemical etching tends to be an isotropic process. The etching process etches under the resist by a distance equal to the thickess of the film.

Photoresist Removal:
Photoresist removal typically uses proprietary-liquid resist strippers, which cause the resist to swell and lose adhesion to the substrate. Dry processing may also be used to remove resist by oxidizing(burning) it in an oxygen plasma system, a process often called resist ashing.

Metrology and Critical Dimension Control:
It is extremely important to be able to maintain accurate control of critical dimensions(CDs) through photolithography and etching processes, as well as subsequent process steps.

An image of the desired mask is created on a computer graphics system. Once the image is complete, files containing the commands needed to drive a pattern generator are created. An optical pattern generator uses a flash lamp to expose the series of rectangles composing the mask image directly onto a photographic plate called the reticle. An electron beam system draws the pattern directly in an electron-sensitive material.

Reactive-ion etching (RIE) combines the plasma and sputter etching processes. Plasma systems are used to ionize reactive gases, and the ions are accelerated to bombard the surface.

Retical images range from 1 to 10 times final size. A step-and-repeat camera is used to reduce the reticel image to its final size and to expose a two-dimensinoal array of image on a master copy of the final mask.

A final master copy of the mask is usually made in a thin film of metal, such as chrome, on a glass plate. The mask image is transferred to photoresist, which is used as an etch mask for the chrome. Each time a mask is brought into contact with the surface of the silicon wafer, the pattern can be damaged. Therefore, emulsion masks can only be used for a few exposures before they are thrown away.

Because contact printing can damage the surfaces of both the mask and the wafer, manufacturing lines utilize proximity and project printing systems. In proximity printing, the mask is brought in very close proximity to the wafer, but does not come in contact with the wafer during exposure. Projection printing uses a dual-lens system to project a portion of the mask image onto the wafer surface.

where $\lambda$ is the wavelength of the illumination, and $NA$ is the numeraical aperture of the lens defined in terms of the convergence angle $\theta$:

A second concern is the depth of field $DF$ over which focus is maintained; an estimate for $DF$ is:

Aperture is the opening in the lens that lets light pass through to the sensor. It dilates to let more light in, and contracts to restrict light when it is bright. Aperture is probably the first thing most photographers think of when they want to adjust the depth of field.

For many years, the source of illumination for photolithography has been high-pressure mercury(Hg), or Hg-rare gas(Xe) discharge lamps.
DUV: deep ultraviolet region, 200-300nm.
Phase-shifting mask technology is representative of the inventions that have been found in the drive to squeeze the most out of optical lithography. In Fig(a), resolution is lost, because diffraction has caused overlap of the individual line images. 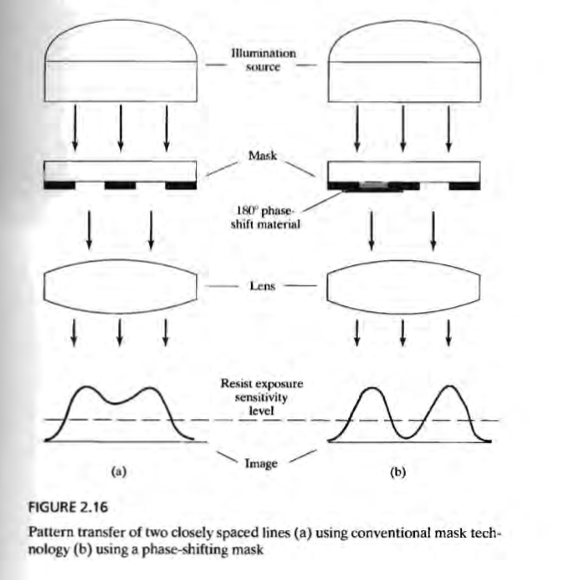 Optical Microscopy:
Optical microscopes typically have a maximum magnification of 1000X. The lower end of the maginification range is usually 1X-5X.

Transmission Electron Microscopy(TEM):
The TEM extends the resolution fo microscopy another order of magnitude down to the 2A range, which corresponds to a distance below the radius of most atoms.
Although the TEM provides very high resolution, its application requires special preparation in the extremely thin samples.