The multi-armed bandit problem is a classic reinforcement learning problem which indicated the dilemma between the exploitation and exploration.
We consider a time-slotted bandit system ($t = 0,1,2,\dots$) with three arms. We denote the arm set as $\{1,2,3\}$. Pulling each arm $j$ ($j\in\{1,2,3\}$) will obtain a reward $r_j$, which satisfies a Bernoulli distribution with mean $\theta_j$,

However, in reality, we do not know the values of $\theta_j, j\in\{1,2,3\}$. We need to estimate the values $\theta_j$ via empirical samples, and then make the decisions at each time slot.

Suppose we obtain the Bernoulli distribution parameters from an oracle, which are shown in the following table below. Choose $N$ = 10000 and compute the theoretically maximized expectation of aggregate rewards over $N$ time slots. We call it the oracle value. Note that these parameters $\theta_j, j\in\{1,2,3\}$ and oracle values are unknown to the three bandit algorithms.

Therefore, we have that

We design three algorithms as follows to maximize the aggregated reward. Code and Results
We compute the expectation, and plot the actual reward and average reward against time slot ($t=1,2,\dots,N$). Due to the large scale of $N$, to see more clearly, we set the $x$ axis to be the $\lg N$.
To see the exact performance of each earm, we also plot the the reward of each arm. If the arm is not chosen, we set the reward to be -1 as a default assignment. Each time when a arm is chosen, we alternate the default reward ($-1$) with the actual reward ( $0$ or $1$ ).
To reduce the experiment error, we repeat the experiment for $100$ times and take the average values as outputs.
Here are the code and results.

According to the simulation, we observe that: $\ \ \ $We notice that if $\epsilon$ is too small, we do too little exploration, therefore, we may not get an accurate understanding of the arm performance. Therefore, the total reward is decreased.

$\ \ \ $We design an improved $\epsilon$-Greedy algorithm to get better performance. The motivation is that — when $t$ is small, we set large $\epsilon$ to explore and obtain information quickly; when $t$ is large, we set small $\epsilon$ and exploit the information we already have. Shown as the follows, we set $\epsilon = t^{-\frac{1}{2}}$. We remain the $N=10000$ and repeat the experiments for 100 times just as previous experiments.

As a result, we discovery that the new aggregated reward is much closer to 8000; the reward and average reward converge to 0.8 more quickly. According to the simulation:

$\ \ \ $We design an improved UCB algorithm to get better performance. The motivation is that — when $t$ is small, we set large $c$ to explore and obtain information quickly; when $t$ is large, we set small $c$ and exploit the information we already have. Shown as the follows, we set $c = \frac{1}{\log(t)}$. We remain the $N=10000$ and repeat the experiments for 100 times just as previous experiments.

On average, we get better performance.
However, we also notice that, for some cases, the total reward is relatively small, the UCB algorithm is quite unstable and do not have a excellent lower bound.

Main idea:
We notice that in the UCB algorithm, we actually do not use the information of probability distribution.
The next algorithm, however, we take full advantage of the information that each arm generates a Bernoulli distributed reward.
In Thompson Sampling algorithm, we define a prior probability distribution for each arm, $\hat{\theta}(j)\sim\text{Beta}(\alpha_j,\beta_j)$. In the experiment, for arm $j$, if we observe there are $k$ success out of $m$ attempts, then we update the probability, i.e., $\hat{\theta}(j)\sim\text{Beta}(\alpha_j+k, \beta_j+n-k)$.
The proof is shown as follows.

In the simulation, we first pull each arm once as initialization. For $t = 4,\dots, N$, we always pull the arm with highest $\hat{\theta}$. 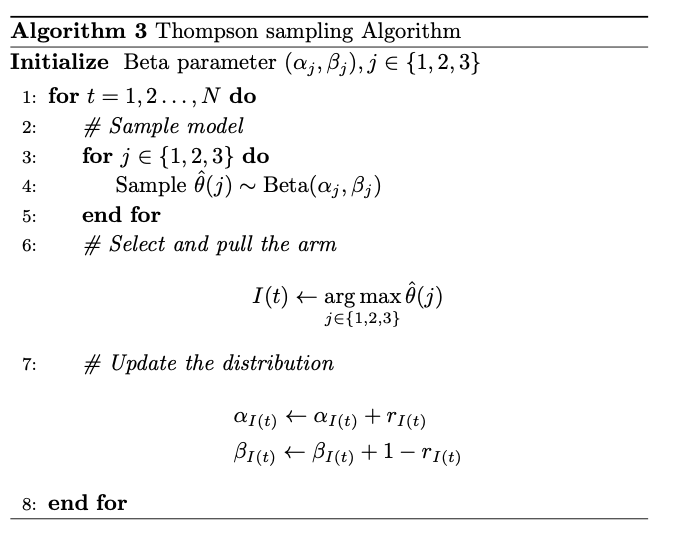 According to the simulation:

The overall reults is shown as follows:

In the previous situation, we assume the reward distribution of three arms are independent. Here, we provide a method to analyze the dependent multi-armed bandit problems.

To generalize the problem, we assume that there is a machine with $N$ arms that are grouped into $K$ clusters. Every arm in a single cluster are dependent, but arms in different clusters are independent of each other. Each arm $i$ has a fixed but unknown probability $\theta(i)$ of generating a success reward (i.e. $r_i = 1$). Let $[i]$ denotes the whole arm cluster which contains the $i$th arm, and define $C_{[i]}$ be the set of all arms in that cluster including the $i$th arm.
Define $s_i(t)$ be the number of times arm $j$ successfully generates a reward in $t$ time slot, $f_i(t)$ be the number of times that arm $i$ fails to generate a reward, $\varphi(h_{[i]})$ be the prior probability distribution and function $h_{[i]}$ abstract out the dependence of arms on each other in one cluster.
Therefore, we have that

In each timeslot, we solve the problem in two steps:

In each time slot, for each cluster $i$, we computer the reward estimate $\hat{\theta}(i)$ and the corresponding estimate variance $\hat{\sigma}(i)$ of each cluster. After that, we use a specfic policy (such as UCB, Thompson Sampling, etc.) to select a cluster. Finally, we use the policy to choose the “best” arm in that cluster. In this method, a good estimate reward should be accurate and converge quickly (i.e., $\hat{\sigma}(j)\to 0$ quickly).
We have two strategies shown as follows.